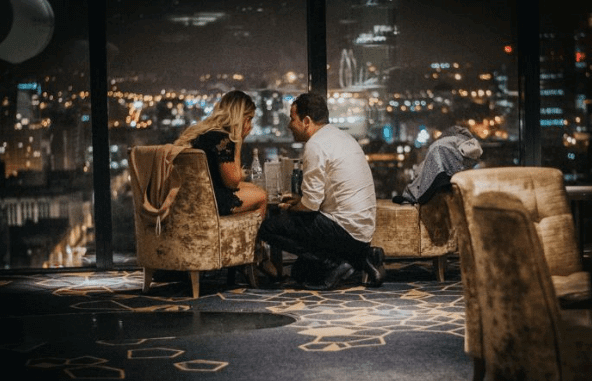 One of my very good friends introduced me to this fab engagement. I would like to see a better proposal than this!

Well it started with asking Shelley Dad blessing before the chaos(by far the scariest thing to do, proposal was easy). Once I got the blessing I cracked on with the planning.

I was booking New York but I knew Shelley would expect something so I chose Manchester as my Sister and her Boyfriend live over there. Easy just to say, let’s visit them with Shelley having no clue.

Once the flights were booked I told my sister and her boyfriend the plan of what I will be doing(proposing). So I got planning on how the day would go: Where for a meal and drinks and so on? I always in my head wanted a secret photographer as there nothing better than looking over memories of the day.

After extensive research and numerous emails, I found the places I wanted and booked in. For the meal I went with James Martin Restaurants and for the drinks and proposal I went for Cloud23(as it had panoramic view of the city) which was less than 5 minutes away from the restaurant. Once all was booked and staff knew the plan it was onto finding a secret photographer. I emailed a number of photographers from the Manchester area and explained what I was looking for. Louise Jacob got back and was enthusiastic about the idea, as she had never done something like this before. Booked Louise and kept in contact through email about the plans.

It’s a book I make every anniversary and its photos of the year of us together. I wanted to use this book to help with the proposal(another memory to look over in years to come). The last page asks ‘Will you marry me?”

I let my sister and her boyfriend know the plans and we went from there.

The night before proposal: We hatched a plan the night before the proposal and I know Shelley would like to be done up if ever proposed too so we got Sam(sister’s boyfriend) to text his sister and say to ring and say a reservation has come up and she can’t go but it’s a real swanky restaurant, do we want it? We agreed to take it, this meant Shelley would want to get a new dress, hair done and so on. Next morning Shelley and my sister went out dress shopping and got their hair done. Next step in the puzzle, as it was a Friday Sam was in work, his world class acting came into play(like a scene from EastEnders), he had to come back not feeling well and he couldn’t go out with my sister staying in minding him. Once we convinced Shelley to still go out(new dress, hair), us two got ready for the restaurant. Unbeknownst to Shelley, Emma(my sister) and Sam were getting ready and heading to the hotel to do up the room. I told them the proposal will be done by 9:15pm so you can arrive into Cloud23 then. We arrived at James Martin restaurant and had a lovely meal, next stop was Cloud23.

We arrived at Cloud23 and had a few drinks, had no clue were the photographer was sitting which was good. Told Shelley I was going the toilet, was actually running to reception to pick up the a book I had ordered and delivered. Walked back over to the table, was like walking the Green Mile I was that nervous.

Presented Shelley with the book and she began reading through with a few tears. Once Shelley turned over to the last page that’s when I went down on one knee and asked my soulmate to be one. I glad she said yes as those photos would have been embarrassing.

After another drink, Emma and Sam arrived for celebrations. We partied the night away while taking numerous calls to congratulate us. Late night, then a final surprise to the hotel being done up. *Best thing: We were back in Dublin and Shelley said I wish we got a few photos of the night, that’s when I showed her the secret photographer photos*

Shelley was in complete shock and had no idea about the proposal which I’m delighted with. Shelley is like a young Miss Marple, she usually knows or finds out everything so I was delighted with the whole day/night and I could of done it without the help of Emma, Sam, John(Shelley Dad for saying YES!) and the staff at James Martin, Cloud23 and the Midlands hotel.

Check out the slide show of the full engagement right here!

Well I think you will all agree that this was such an fabulous engagement! Congratulations you guys!