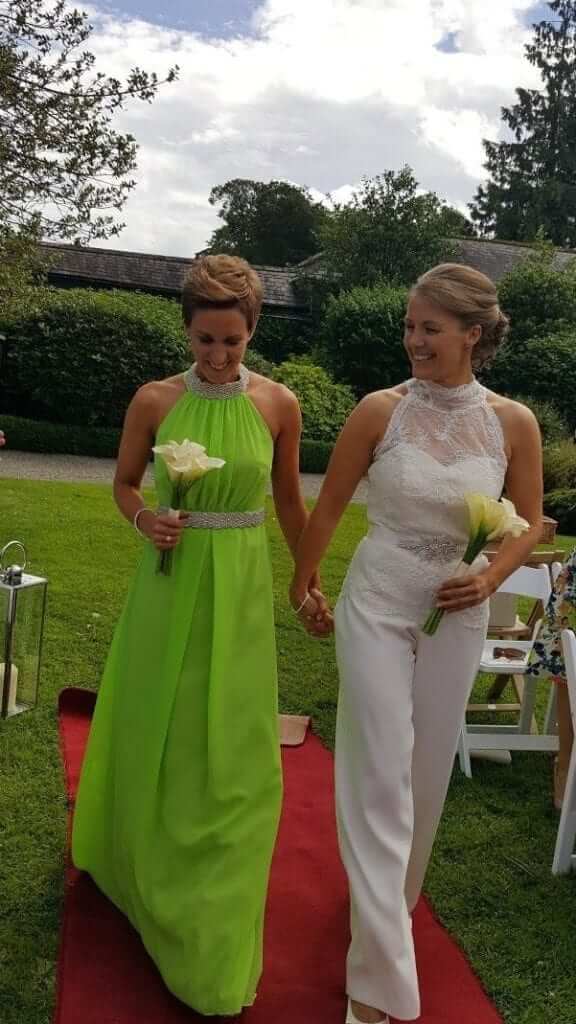 During a recent stay in Rathsallagh House, I met a lovely couple named Helen & Angela.

After chatting over breakfast they mentioned that they were only 5 weeks married and came back to celebrate in the venue where they said ‘I Do’.

They couldn’t have praised Rathsallagh House enough. I had no other choice but to ask them to tell me all about their wedding day and here it is….Angela & Helens Real Wedding Story.

When Helen asked Angela on their first date, she asked her if she liked rugby. She said she hadn’t really been to many rugby matches but she did manage to take in the women’s world cup in France in 2014.

What transpired was a sure sign that they were meant to be….

Angela explained that she had gone to the semi final to watch France V Canada. Helen laughed as she actually refereed that game.

Helen had a picture from that match where she is lining up with the teams for the national anthems. Behind her in the stand is Angela….YES Angela!!!! (I pretty much had to be picked up off the floor when I heard this!)

A year later, Helen proposed to Angela during Christmas in Bruges. She had the ring made in Antwerp and proposed to her in a little stable whilst playing her favourite Christmas song “Oh holy night”

They didn’t delay, they got straight in to planning. A casual informal type celebration was required so they needed flexibility from a venue. Rathsallagh was perfect for this.

I couldn’t believe when they explained their experiences while visiting different venues. Some showed no sign of flexibility and worse, some were not very welcoming or just awkward with same sex couples.

A quote from one venue was:

“I don’t know if we do YOUR wedding type here”

….And they weren’t talking about the BBQ meal that they wanted to serve. I cannot get over this level of ignorance. How is this even happening in this day and age! Shame on venues that carry this sentiment.

This was far from the case with Rathsallagh House. There appears to be a very strong ‘can do’ attitude and is of course very welcoming. Anyone I spoke to about this venue couldn’t stop raving about Catherine. She appears to be the ethos of excellent wedding coordination. She takes great care of her couples and makes sure that they get the most perfect experience. One nice touch Rathsallagh house does on the morning of a wedding is when guests arrive, staff meet and greet guests in the car park and bring them to their rooms….what a lovely touch.

Once the venue and date was set, they did not waste time booking a humanist. They wanted to be able to do the full legal ceremony at Rathsallagh House so Amy Brown was booked straight away.

When it came to the dresses, they didn’t want a typical wedding dress style. Angela went for a lime green dress and Helen went for an ivory jump suit. Tamem Michael in Ballymount designed both outfits.

They were incredibly lucky with the weather. The sun shone all morning which meant they could have their ceremony in the walled garden.

Overall Helen & Angela tried to stay away from fuss. They just wanted a relaxed easy going day that guests could enjoy.

One lovely little touch that Angela surprised Helen with was a reading from the book “Guess how much I love you” during the ceremony which had everyone in tears. I read this book to my little boy and it is such a special story.

​After the wedding, a few days later they travelled around Slovenia for one week but are also going on the main honeymoon to South Africa for Xmas & ​the New Year.

Some parting advice from Helen & Angela

“Don’t worry about the small things, plan early and Don’t ask for loads of opinions”