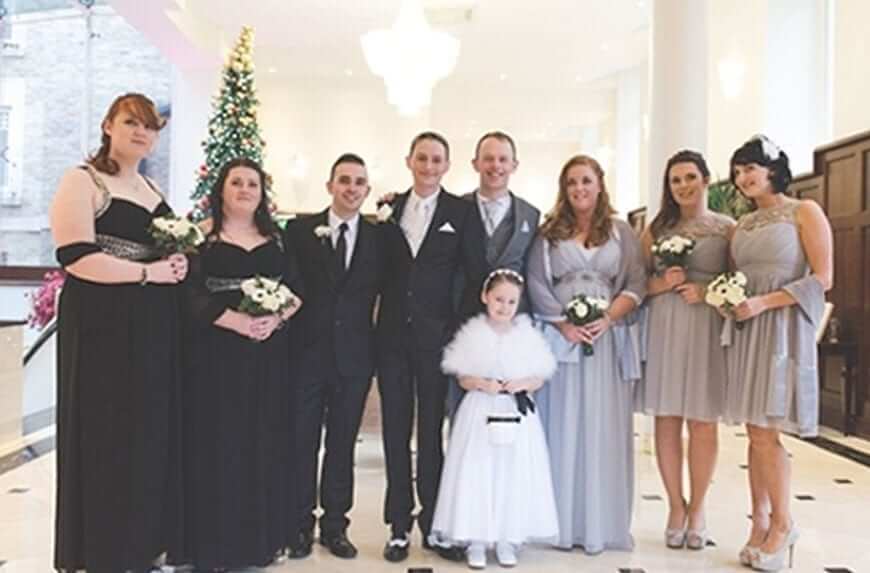 P.S – scroll to the end for the wedding pics!

It all started with a brief encounter on the dance floor but thanks to Anthony’s amazing investigative skills, he was able to track Alan down and connect on Facebook, they were reunited and together ever since.
In July 2012, Alan was making his way to Dublin Airport to head on his annual venture to Belarus to The Burren Chernobyl Project. Anthony escorted him at silly o clock in the morning. All of sudden Alan starts going in to panic mode and uttered those fatale words: ‘I think I forgot my passport’ Nooooooooooooooo! In true Hollywood style, Alan swerves the car over to the side of the road in front of the canal. Alan jumps out of the car and instructs poor ‘half asleep’ Anthony to check the glove box. After rummaging through to no avail, Anthony turned to tell Alan ‘no joy’ only to find Alan down on one knee with a ring in hand asking him to marry him. Of course Anthony said yes!
They didn’t jump in to the planning straight away, they took their time to enjoy engaged life and after just over a year they got the ball rolling.

• Anita & David in their bridal party made the invitations.
• Tables were named after Penguin Classics with quotes from each book on each table.
• They booked Lovin Letters to have the words Love in bright lights!
• They had Photobooths.ie which went down a storm
• The Candy Cart Company provided the Candy Cart
• Rather than a guest book, they opted for a Thumb Print Canvas.
• There were a few children at the wedding and they had some activity books and games to keep them busy.
• They put some special bits in the rest rooms for the guests.

They spread out all of their tasks so that they could give each stage the attention that it needed.
On the day they were both relaxed but excited. They opted for a 3pm ceremony which meant that they got amazing pictures at sunset. They had their speeches after the starter so that meant that those who were going to speak could enjoy their meal without feeling nervous.
There wasn’t a dry eye in the house after the speeches. By the time speeches and meal was over, Alan and Anthony couldn’t wait for their first dance. Rather than going for the lovey dovey slow dance they ripped up the dance floor with Black Eyed Peas – ‘I’ve got a feeling’.
They are going to be taking their Honeymoon this summer in Asia but they had a mini-moon in Stockholm after they got married.

1. Be as organised as you can for the wedding coordinator
2. Do a timeline with your photographer and specify in advance if there are particular shots you want.
3. Hang on to some reception food for the wee hours of the morning in the res bar
4. Take a moment alone on the day
5. Utilise your contacts – if you have friends that can bake – ask them to bake your cake!
6. Delegate to take the pressure off yourself
7. Allow plenty of time for outfit shopping
8. Also allow plenty of time to book a celebrant
9. Reserve some funds for unforeseen expenses

And Now For Some Pictures!